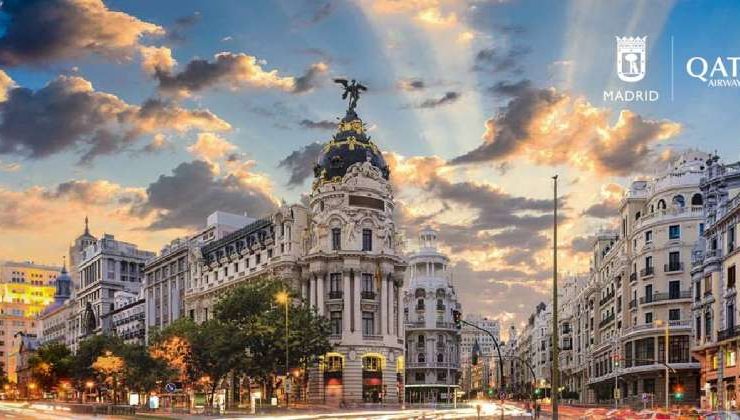 Qatar Airways has announced a new partnership with the Madrid Tourism Board (Madrid Destino), in a strategic step aimed at supporting the revitalization and growth of tourism in the vibrant Spanish capital.

The partnership with the Council was recently signed, and is scheduled to continue until March 31, with the aim of promoting the visit to Madrid in many global destinations through a series of joint initiatives.

The Spanish capital, Madrid, has emerged as a new international luxury destination after being designated a World Heritage Site by UNESCO and after it recently opened a group of luxury hotel brands, redesigning some tourist sites such as the Plaza de Espana and a number of other major developments. . Madrid has been named Europe’s Best Convention and Exhibition Destination for 2021 at the internationally recognized World Travel Awards.
Qatar Airways Group CEO Akbar al-Baker said: “We invite everyone to visit the beautiful city of Madrid, which makes one love to travel again. The Spanish city is famous for its rich and diverse heritage, as well as having a number of industries, handicrafts and craftsmen on a world level.”

Hector Coronel, President of the Madrid Tourism Board, said: “The signing of this agreement not only represents a milestone in our relations with Qatar Airways, which has operated flights to Madrid since 2005, but also enables us to strengthen our tourism relations with the Middle East, which is one of the Our main strategic markets.

He added, “The initiative, run by the Madrid City Council Tourism Department with Qatar Airways in Qatar and the UAE, aims to attract a segment of travelers to Madrid, which will positively impact the country’s economy. This joint initiative will enable us to promote the city’s distinguished tourist attractions and its recent openings, with the aim of encouraging visitors with high purchasing power to travel to Madrid.”