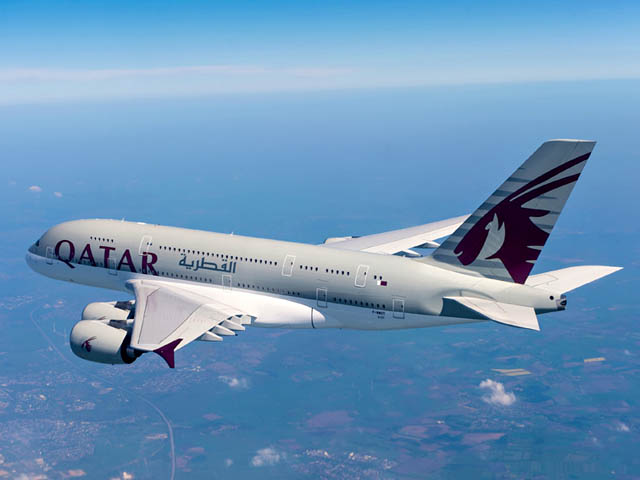 Qatar Airways returns its A380 to Paris

Qatar Airways on Wednesday re-established its third daily rotation between Doha and Paris, operated by Airbus A380. The superjumbo is also back in London, but tension is not easing with the European aircraft manufacturer over the A350s.

Since December 15, 2021, the Qatari national airline has re-established on the axis between its base at Doha-Hamad International and Paris-CDG airport a third flight per day, as before the Covid-19 pandemic, operated by configured A380 to accommodate 8 passengers in First, 48 in Business class and 461 in Economy. The aircraft registered as A7-APG operating flight QR39 took off at 8.46am, nearly an hour late, and according to Flightradar24 should arrive at 1pm as scheduled in the French capital. The other two departures this Wednesday are operated by Boeing 777-300ER (QR41) and 787-9 Dreamliner (QR37); an A350-1000 was used on this evening rotation before the Covid-19 pandemic.

When announcing the return of this third flight in early October, Qatar Airways spoke of a constantly increasing demand on the French market; “This will also allow us to even better connect the many destinations covered to date by our network. These adaptations on the Doha-Paris route represent a strong sign, symbol of the resumption of traffic that we are proud to support, and of the ever-growing confidence that our customers place in us. Qatar will be the center of attention in the coming months with the FIFA World Cup in 2022 and we are also delighted that travel conditions are relaxed for French travelers who can count on Airline of the Year for transport them in complete safety ”, declared Smaïl Boudjennah, regional director for Western Europe.

Oneworld alliance company A380s are also returning to London Heathrow, on two of the five daily flights; his boss Akbar Al Baker estimates that only 5 of the 10 superjumbos will be put back into service (three have been reactivated since the beginning of November; they were all grounded since March 2020), and only for the time necessary, in this case the replacement of the capabilities of the A350s grounded for months due to a problem with degradation of the surfaces under the paint. The suspension of deliveries of the 23 A350-1000 still awaited by Qatar Airways was confirmed last June, after postponements announced as early as September 2020 due to the impact of the health crisis.

The tension is not lowering in what is now a very public dispute: in an interview with the South China Morning Post and published yesterday, the CEO of Qatar Airways explains that he will undoubtedly have to stop more A350s and probably rent others, in addition to the Boeing 777 already announced at BOC Aviation. “We could still let the water flow under the bridges and continue,” Akbar Al Baker said, but with Airbus whose remarks are described as “derogatory”, “the damage is very severe. I don’t know how we will be able to work with them again. How would you like me to do business again with a company that doesn’t care about the customer at all? It only cares about its financial statements and its results ”. And he recalls his decision never to buy the new A350F: “I looked very positively on freighters. But they destroyed that relationship. I don’t think they’ll ever get a single size order that we would have placed ”for the freighter version of the A350.

Qatar Airways is therefore considering how many planes it will need to purchase to compensate for the loss of capacity. At least two other 777s (also ex-Cathay Pacific) should be leased according to the SCMP.