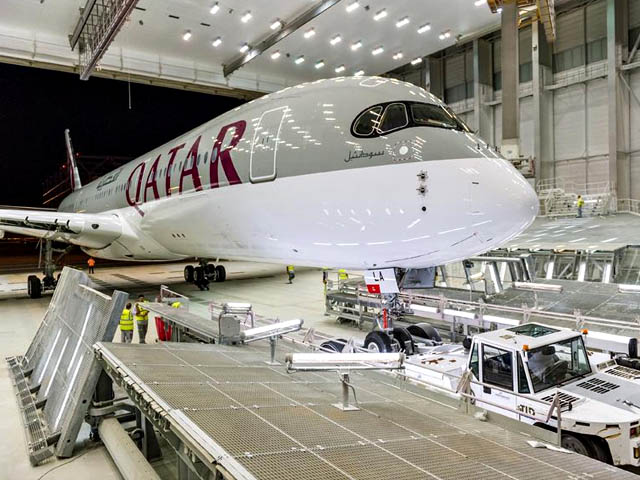 Qatar Airways has announced that the paint problem detected in its A350 type aircraft ordered from Airbus poses a fire hazard to the fuel tanks, which may threaten the safety of passengers and crew members on board.

Umpteenth episode in the legal saga between the Qatari national company and the European aircraft manufacturer following the discovery fifteen months ago of accelerated degradation of the surface of certain A350s, legal documents discovered by the Bloomberg agency: the company based at Doha-Hamad International Airport says that according to EASA documents released in April 2021, the degradation of the lightning mesh “could pose a hazard if it coincides with the tanks” when an aircraft is struck by lightning . Qatar Airways claims that the surface wear of the affected A350s is “such that wind and pollutants could penetrate through the surface and damage this mesh”: the damage having been noted on the wings where the fuel tanks are located, she asserts that this is precisely a co-incidence. This would therefore involve flight safety and would not be a simple “cosmetic” problem, as indicated by Airbus.

Qatar Airways technical director Ali Al Hilli said “the design and manufacture of the A350 are flawed”, recalling that inspections on the 23 A350-900s and A350-1000s grounded since last August on order from the Qatari regulator revealed “cracks, some of them severe – particularly around windows – exposure of lightning protection and damage to lightning protection” – with in some cases “the composite base of the fuselage is visible “.

Airbus has already denied all of Qatar Airways’ accusations, saying there is “no reasonable or rational basis” for the A350 flight ban. Recall that at the beginning of March, the aircraft manufacturer had asked the judges to award it $220 million in damages for the refusal to deliver two A350s; Airbus also plans to recover “millions of dollars in credits” granted to Qatar Airways, legal documents show. The latter had already requested 618 million dollars in damages for the grounding of its A350s affected by the problem, plus 4 million per day of additional immobilization. At the end of February, the airline went to court to request the reinstatement of the order for 50 A321neo (including ten in LR version) expected from February 2023, an order canceled by Airbus at the end of January.

No reaction this morning to these announcements; EASA has already ruled that the problems of the A350s have “no impact on airworthiness” to other customers who have noticed the problem, for example Finnair as early as 2016, followed since by Cathay Pacific, Etihad Airways, Lufthansa and Air France (as part of the maintenance of Air Caraïbes aircraft) – and recently British Airways and Iberia. THE European regulator has never requested the grounding of the affected A350s, which have been repaired.

Despite the announcement of an order for 100 Boeing 737 MAX 10s (and 36 777-8Fs) to replace the A321neos, several Qatar Airways representatives have refuted claims that relations between the two have become “strained”. The Qatari company’s senior director of aircraft production and delivery supervision, Krunoslav Krajacevic, told Bloomberg: “Qatar Airways and Airbus have worked together for more than 20 years, I am convinced that the relationship will remain strong and will continue despite these procedures”.

The case will go to the High Court in London at the end of April, if no out-of-court settlement is reached by then.